“It’s okay that I may not be normal again, because I am again.”

Speaking of not looking like I used to, I frequently see people I know and they look right through me ~ not on purpose, they just don’t recognize me.  Obviously my hair is a clusterf*ck, and I haven’t been able to wear makeup for months.  It’s kinda fun to not give a sh*t 🙂  This is not the first time I’ve had a bad case of the fuglies!  I recently found some ancient photos in my parents’ garage, including this unfortunate example from my freshman year of high school.  Todd and Mychaela were viciously laughing their asses off when they glimpsed this slice of 1970’s horror.  They told me that I’d have to have huge balls to post it on Facebook, so I didn’t.

I heard from some of the wonderful peeps at City of Hope say that I was now my brother/donor Leason’s twin, and I’ve enjoyed playing that up with the Tweedle Dee and Tweedle Dum thing, but I’ve never really understood what that meant, biologically.  That is, until I did a little research on the subject and found out that I am a chimera.  I know, that’s what I thought…  WTFIAC – What The F Is A Chimera?  I’ll tell you exactly what it is:  It’s a mythological beast made up of various parts of a lion, a goat and a dragon, with the tail of a snake.  How RADASS (rad + badass) is that?  It may be radass, but it’s another cruel reminder that I haven’t made much progress in the way of good looks since 9th grade.  Patients who have undergone a bone marrow transplant are called chimeras, because we have TWO SEPARATE DNA’S!  My blood cells and my bone marrow cells have the identical DNA as my brother does, while the cells in the rest of my body have my original DNA.  That’s why my blood type changed from my O to Leason’s A.  Is your mind about to explode?  All three of mine are. 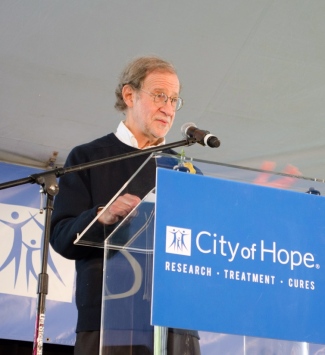 Celebrating 1 year, 5 months with the fam 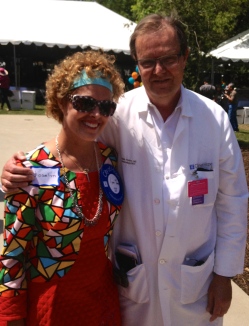 You could be the Match! 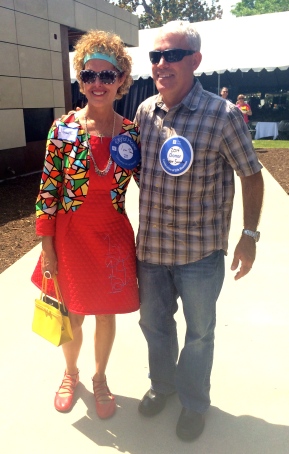 I attended City of Hope’s 38th Annual Celebration of Life ~ Transplant Survivors’ Reunion, which was my second.  Once again, it was an inspiration fest, with survivor buttons stating how many years it has been since the wearer’s transplant.  The largest number i saw was 38!  They don’t call it City of Hope for nothing!  My family was there to celebrate with me, including my caretaker/husband, Todd, my daughter, Mychaela, my son, Rex, my parents, and of course, my donor/brother/hero/life-saver, Leason.  Our good friend, Jared, also attended.  Rex and Jared signed up for the Be The Match Registry in the hopes of donating bone marrow and saving someone’s life.  Mychaela surprised me and signed up on her own.  It was fantastic to witness a couple of first time meetings between a donor and a patient, especially an Israeli donor who flew from Tel Aviv to meet her Lebanese recipient!  I wish I could register!  It’s a life-altering gift for both parties.  The highlight of the day for me was getting to visit with Dr. P, my wonderful main doc from the time I first stepped foot into City of Hope until my transplant.  He oversaw all of my treatments, transfusions, tests, bone marrow biopsies and ultimately, my transplant.  He absolutely saved my life!  When he first saw Leason, he didn’t recognize him, but then Leason turned around and gave him a view of his backside.  Dr. P’s smile grew wide as he recognized the spot where he had harvested a quart of marrow 17 months earlier 🙂

After my second cataract surgery, I can happily report that my vision is bionic, and I’m loving my new peepers 🙂 As soon as I woke up from the anesthesia, I was anxious to show off my sharpshooting skills!  The surgery is really cinchy, especially with Dr. K at the helm.  It just sounds kinda rad, since your eyeball is getting sliced, but it’s quick and not very painful at all.  I have learned over the past couple of years to NOT Google whatever procedure is on the horizon, because it’s no fun to spoil the surprise by knowing what to expect ahead of time.  Here is a play by play of the miracle that prevented me from going blind:

61 thoughts on “On Second Thought”